Join us as we take a deep dive into one of the most talked about trends of recent years. Think sunken lounges, geometric shapes and vintage armchairs!

Join us as we take a deep dive into one of the most talked about trends of recent years. Think sunken lounges, geometric shapes and vintage armchairs! 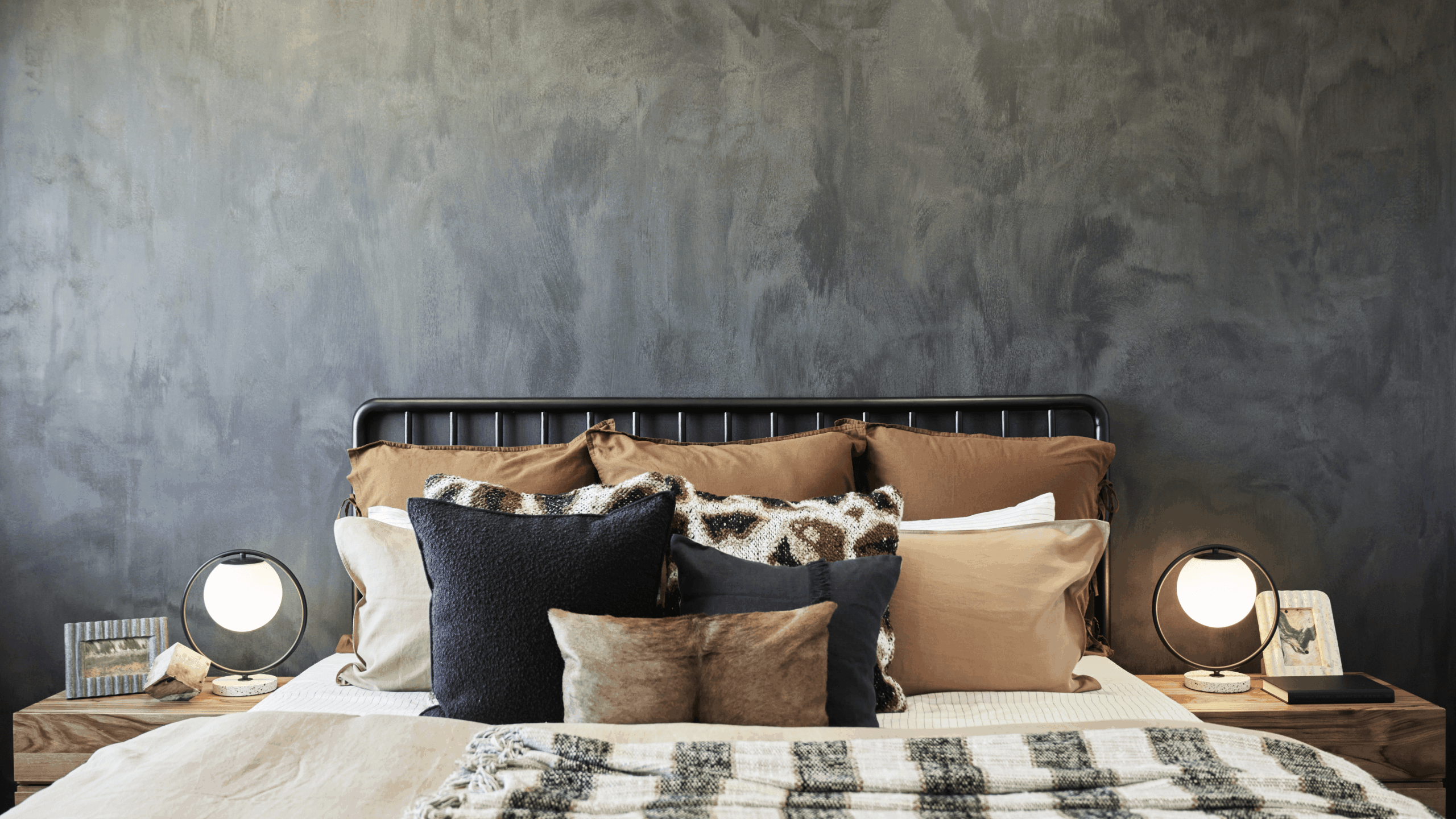 Be Inspired By Mid-Century Modern Design

If you’ve been paying attention to the latest in home design inspiration, then you’ve most likely come across the term mid-century modern design once or twice before.

But what is it, and why is it so popular among home buyers today?

It broadly describes interior design and architecture trends from the early 1930s to the mid-1960s. In a time where we weren’t far off the first moon landing and Elvis Presley was in his heyday, mid-century interior design was celebrating clean lines and gentle curves, as well as strong colours, textures and patterns.

Architecturally, it embraced flat or raked roof lines and an open plan layout with a focus on indoor-outdoor living. Bringing bountiful natural light in through large windows and sliding doors and instilling a connection to nature through timber and stone features.

It was an era that gave a nod to well-designed and timeless features, built on the idea that form follows function. Providing just a hint of nostalgia for generations past, it’s not hard to see why mid-century modern has taken hold of contemporary homes, and buyers, in Australia today.

Mid-century modern design is all about embracing timeless architecture and eclectic styling choices, with one golden rule in mind. It’s important to take inspiration, rather than replicate the homes of eras gone by.

With this rule in mind, keep scrolling, as we’re giving you quick tips on how you can create a contemporary space inspired by one of the hottest trends of the season.

How To Bring the Mid-Century Modern Look

Into Your New Simonds Home

If you’re drawn to dreamy terrazzo tiles and vibrant shapes and colours, mid-century modern interior design should be on your radar when designing your new home.

Rather than trying to transport homeowners and guests to an earlier time, the modern interpretation of mid-century design gives a nod to the playful patterns, shapes and colours of the era, while keeping the home contemporary, comfortable and functional. Go overboard with styling, colours and textures, and you risk overwhelming a space and making it appear dated.

When it comes to styling, a subtle connection between the past and the present is created through credenzas (think wooden sideboards), armchairs, rounded lamps and pendants and pops of bright or earthy colours that evoke just the right amount of a 1950s and 1960s feel.

Mid-century modern design is definitely having its moment, and we’re here to walk you through how you can incorporate hints of its timeless and enduring charm into your new Simonds home.

Image: Ocean Deep from Carpet Call's Colour Smart range provides a timeless base to build upon with your styling choices.

Start From the Ground Up

For those searching for a bolder, more statement look, the Colour Smart range from Carpet Call injects personality and a sense of vibrancy into any room. Choose from a range of colours, from earthy greens to deep and misty blues, with each containing a unique fibre structure that ensures a hard wearing and stain resistant surface; all while still retaining the cosy, softness under foot that we all look for when making decisions about carpet.

Carpet is such a personal choice and with a range of options on the market, it can quickly turn into an overwhelming process. Our interior design qualified Gallery Consultants and the team at Carpet Call are at the ready to listen to your unique needs and understand how you like to live, so that they can help you make the best decision for your home and lifestyle.

Image: Give your space a rustic, mid-century modern feel with the earthy Sand Haze from Haymes Paint.

While mid-century modern is all about the vibrant colours and patterns, it can be useful to start with a classic and sleek base, that you’re able to build upon with bright hues and geometric shapes. If this sounds up your alley, look no further than Marble Mist from Haymes Paint for a timeless backdrop that will let your styling do the talking.

Go a step further and create a dynamic colour palette, with bolder pops of colour in Rubicon, Immersive Blue or Sand Haze from Haymes Paint. These hues provide a rich backdrop for suede or leather furniture, as well as pieces made from darker wood or luxurious gold and brass accents and fixtures.

Image: Create a hero piece for your kitchen with the striking Turbine Grey from Caesarstone.

Be Inspired By Nature

If you recall from before, mid-century modern architecture is built around the idea of achieving an indoor-outdoor flow. But this aspiring connection to the natural world doesn’t just stop with an alfresco or big windows and sliding doors. Embracing organic forms within the home, like timber and stone features, perfectly ties the inside and the outside together.

We’re always on the look out for hero pieces that will provide a timeless statement, and in an open plan living area, a stone kitchen benchtop expertly anchors your free-flowing space, while infusing that connection to the outside world. For a quality quartz surface that evokes a mid-century modern feel, explore Caesarstone’s natural and raw Turbine Grey and Georgian Bluffs, or go darker with the soft, charcoal base of the Black Tempal for the perfect nod to nature's beauty in your living areas.

Prev Next
Other blogs we think you'll love!
Previous Next 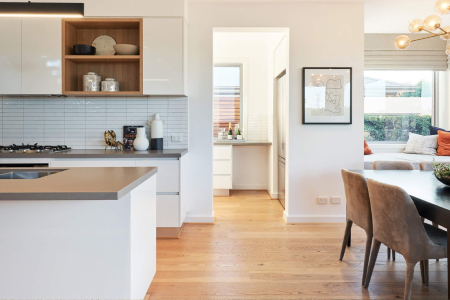 Let's Hear From Our Interior Designers Part One 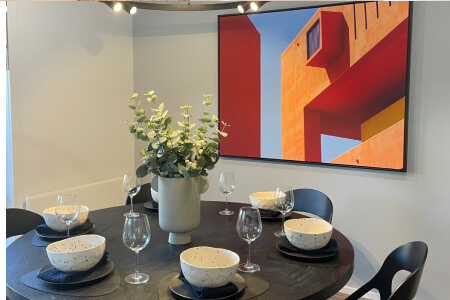 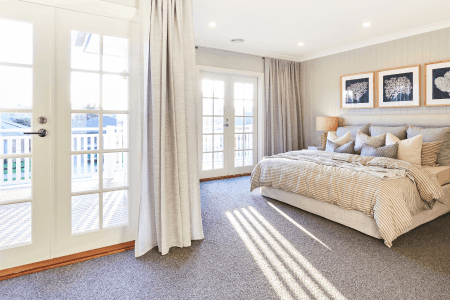 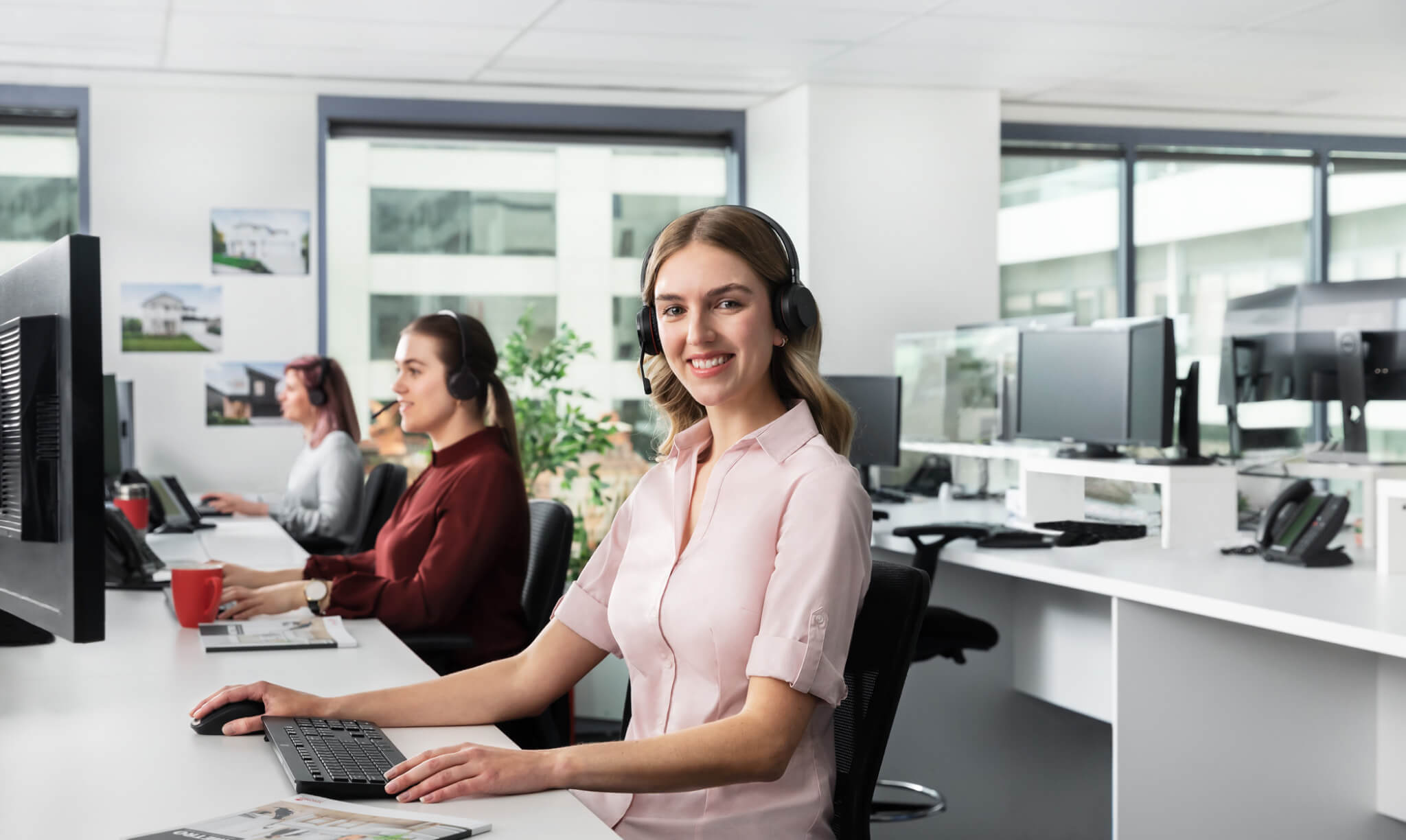